Here in Georgia, many homeowners will call us and report having spotted what look like enormous bees. While they can sometimes be mistakenly identified as Asian Giant Hornets, the creatures in question are typically European Hornets. 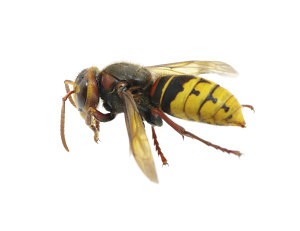 I have spoken before more generally about European Hornet biology. However, I would like to focus on their nesting habits and life cycle to help homeowners better identity areas of risk when they first spot the European Hornet.

European Hornets are social insects. They establish colonies every year and then abandon them during the winter. The life cycle of the colony begins in the fall of the year. During this time, the colony will produce a group of female European Hornets that will become queens. At the beginning of winter, those future queens will hibernate underneath loose tree bark, space between walls, or any other secluded space.

In the spring, the queens will emerge and establish colonies. These colonies are typically located high off of the ground. They can be found inside of tree hollows or inside of wall voids. Once the nest has been established, the queen will lay the a group of eggs. These eggs will become the first workers for the colony, and will perform the tasks that a required to sustain it. The average colony will eventually have at least several hundred workers, and these workers are often what homeowners will spot around their property.

Workers are tasked with gathering food for the colony. European Hornets can actually be beneficial in some cases due to their tendency to consume other pests, such as grasshoppers, yellow jackets, and caterpillars. Interestingly, European Hornets have a unique propensity to be nocturnal, and can often be seen gathering food and moving around late at night.

It is important to note that European Hornets are extremely protective of their colonies. If a person or pet comes too close to the colony, the workers will swarm and attack the intruder. The sting of the European Hornet contains an unusually high amount of venom, and can be a very serious problem for those who are allergic to stings.

If you have seen European Hornets near to your home, it is often better to call for a professional service rather than trying to exterminate them yourself. Not only can they sting people and pets, it is also very difficult to get close enough to the nest to exterminate it safely. If you have already located a nest, avoid sealing the area that it is located in until the nest is exterminated. European Hornets have been known to chew through the interior walls of structures and can move inside to escape.

Here at Canton Termite and Pest Control, our team of technicians is highly trained and capable of dealing with any pest situation you might be dealing with. We will assess your situation, and provide you with the safest, most efficient, and most affordable solution in the industry!